It’s been a hectic time here at Battlerock Comics, and with the coming anniversary of Champions Online during the month of September, why not share a new wallpaper image of Galatea Future?

The image is 1600×900, large enough for most widescreen images, and it features our premiere heroine taking flight with Millennium City in background.

The same image is also being used for the cover of the upcoming “Future’s Guardian” #18, which will hopefully be online on the last Friday in September, just in time to celebrate the city that Galatea calls her new home.

Future’s Guardian To Go Beyond

It’s no secret to readers of the “Future’s Guardian” series that our main heroine, Galatea Future, is not originally from the world of Champions Online.  She was brought over from another universe and from an alternate timeline that she herself helped to destroy.  Stripped of her god-like powers and “reset” to her base abilities, Galatea has been doing everything she can to not only help the people of her new adopted universe, but to also help herself do the one thing she wasn’t able to do before… and that was to live as herself and not just serve as a “guardian”.

But now, recent events in this issue have opened a new world to Galatea.  One that has never been seen in Battlerock Comics, but has been somewhat familiar to longtime fans of science fiction.

While we cannot reveal what that world is, series creator David 2 says that he is glad to be able to introduce it to readers.

“Part of the frustration with doing characters that cross over from different universes and different platforms is that I can’t really show too much of that other world in this comic,” he says.

“Each ‘universe’ that my characters appear in are owned by certain companies.  If specific content from one company appears, I have to give them credit to appease their copyright ownership.  And if I introduce content from another company, not only do I have to give that other company credit as well, but I also risk getting a notification from either company that says that I can’t include that content.  That’s part of the reason why all the content seen in ‘Future’s Guardian’, including flashbacks from that previous world, has been done through the eyes of Champions Online.  This is their universe, so we have to see things through their eyes.”

But the content in Issue #14 is different, according to David 2.

“In this instance, we are dealing with content from the same company.  A different universe, with different characters, but from the same developer.  We feel this gives us a little leeway to introduce that new universe to readers briefly enough while keeping the integrity of all the characters intact.”

David 2 also says that the issue will have a connection to recent issues of the CoX Comics series “The Crucible”.

“It’s been fun working with (Crucible creator) Von again to collaborate on our respective series.  While this will not be a direct tie-in to his current storyline, it will establish a connection between Galatea and a certain group featured in ‘The Crucible’.”

Check out the issue synopsis for Issue #14:

Where is she is a surprise.

What happens next will shock you.

Find out how it ties in with the recent events in “The Crucible”, and be prepared for a most unexpected cameo appearance.

The cover itself gives some modest hints as to where Galatea ends up.  And it’s clearly not Iowa. 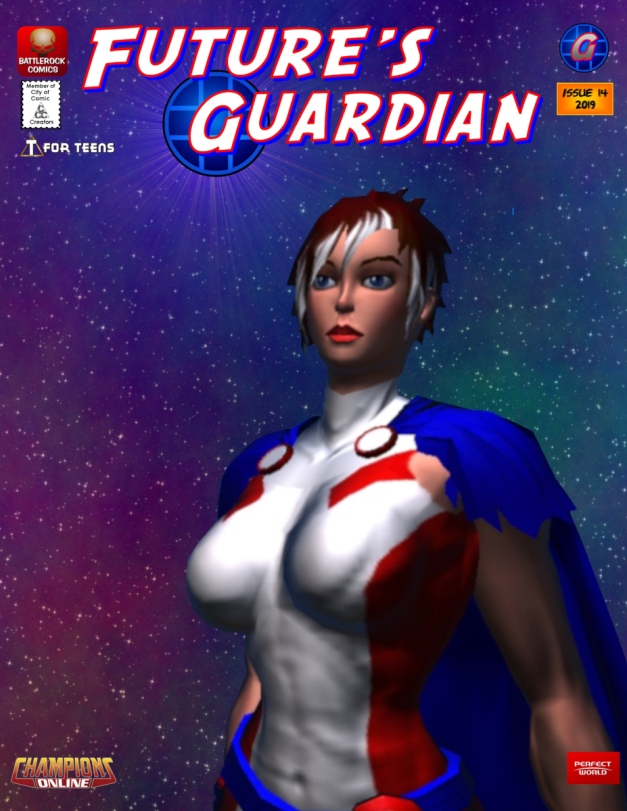 “Future’s Guardian” #14 will be available online on January 25th.

Furia To Step Aside In Issue 25

“Furia” To Step Aside For The Greater Group

GEORGIA – (June 17, 2017) – Battlerock Comics has announced that comic series “Furia and the Guardians” will end with issue #25.  Writer/Creator/Editor/Publisher David 2 says the decision to end the series featuring the purple-haired superhero has mostly to do with the kind of stories being developed rather than any perceived lack of interest.

“When you have a title like ‘Furia and the Guardians’, it’s sort of implied that Furia would take a lead role in the comic.  But of late, many of the stories being developed for the comic have focused on the ‘Guardians’ part.  And the future stories under consideration show a greater emphasis on those other characters than on just the one who happens to be specifically named in the title.  So it’s natural to want to transition the comic to one that features that greater group.”

“Furia and the Guardians” #25 will feature Furia Powers, the former hero from the Praetorian Universe that has been struggling to survive in the so-called “City of Heroes” as both a hero and as a civilian.

“It’s only right that the last issue of the series be predominantly Furia’s,” said David 2.  “And it’s going to touch on a few things that have affected Furia and even helped define her as a hero since the very first issue.”

According to David 2, Issue #25 will involve an old adversary making a return for one last battle against our main heroine.

The real question, then, is who that adversary would be.

“Furia has faced people from two different universes and from two different planets.  From her fellow Praetorians Matt Burke and Neuron, as seen in ‘The Guardian Powers’, to Destitution, to telepathic clockwork robots, to cybernetic punk gangsters, to the corrupt cops in the Paragon City police force, and even with aliens from her appearance in the COX Comics series ‘The Crucible’.  There’s no real lack of villains for her.”

David 2 says that readers should not feel sad, though, about the series ending.

“Issue #25 is something of a milestone for Battlerock Comics.  We’ve had only one other comic reach this point, which was ‘Guardians of the Dawn Spotlight’, and it happened to feature Furia’s other-universe sister, Galatea Powers.  So we’re going to end this in a way that I think people will like.  And then we’ll get ready for the larger series next year.”

Following the publishing of “Furia and the Guardians” #25, there will be a mini-series called “Task Force: Twilight”, which will feature several members of Furia’s superhero group, the Guardians of the Dawn, as they deal with their ongoing battle with the city’s corrupt police officers.  After that, the focus will then turn to that new group series that has yet to be given an official title yet but will be released in early 2018.  More information about these new series will be available at the Battlerock Comics website.

“Furia and the Guardians” is a fan-made not-for-profit comic series which uses material derived from the now-defunct “City of Heroes” MMORPG through a combination of other programs including Titan Icon, Paragon Chat, GIMP, and demo-recording.  It is published for free by Battlerock Comics, a comic subsidiary of Get Brutal Productions.

Fullpage ad for “Furia and the Guardians” #25 (courtesy of mmocomicindex.com)

We’ve decided to do something different here at Battlerock Comics.

To help promote the forthcoming release of “Guardians of the Dawn GRADUATION” #3, we’re launching a new supplemental comic special… the PNN News Break!

So without further ado, here’s the first one…

Hope that piqued your interest in the comic…

Guardians of the Dawn GRADUATION #3 will be online on Labor Day, September 1st.