What About The Cops?

One of the things about comics is that they can serve as a reflection of our society.  Not just as we would like to see things, but also a reflection of how things are at the time.

In the 1930’s and 40’s the comic publishers – still very much young – brought the troubles of the world into their pages.  Their characters dealt with the global depression and the horrors of World War II.  In the 1960’s they dealt with the struggles of civil rights.  In the 1970’s, it was the battle with drugs.  And after the terrorist attacks of September 11, 2001, the two big publishers found their own ways to deal with a world that was both scarred and scared.

It should come to no real surprise, then, that comics should deal with the recent rash of police abuses.  DC Comics recently took some praise and flack when their iconic hero, who is now more “man” than “super”, took a stand against abusive cops in his own neighborhood.

And now you can add Battlerock Comics to the list of comics dealing with this issue.

In the upcoming Issue #9 of “Furia and the Guardians”, Jason Knight’s search for a missing Architect Entertainment employee takes a dark turn as he comes across a police officer who has a rather disturbing history.  What Jason does next will help define his new quest to once again serve as the “Guardian of Kings Row”.

The issue also has a quick tie-in with the events of “The Crucible” #18 over at CoXComics.com as we see what brought Furia Powers to her encounter with Nightstar. 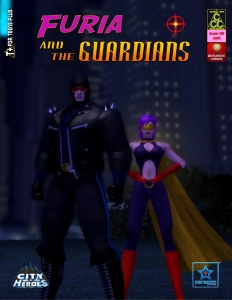 “Furia and the Guardians” #9 is scheduled to be released on October 30th.