Seasons Greetings! Have A Wishful Soundtrack!

While we have been busy working on the forthcoming series “Furia and the Guardians”, we’ve also been putting together something that was on Santa’s List for quite some time… and that was a soundtrack to “Future’s Guardian”.

In previous years, I would come up with an “unofficial soundtrack” to the City of Heroes MMO.  The first time was based off suggestions from other gamers.  The second time was more my personal selection.

Then we moved to the world of Champions Online, and person behind both Elite Ice and Elite Ice Queen soon asked when I would be doing a soundtrack for Champions as well.

Of course, doing a soundtrack is not just a matter of grabbing a few songs and sticking them on a playlist.  It sometimes seems like that with some mainstream soundtracks, but I didn’t want it to be like that.  You need to have a reason for including that song.  Something that connects with the subject.

Well, it took a while, but I was able to get a playlist together of the songs I would select if I could put together a soundtrack for “Future’s Guardian”, and what better time to share it than Christmas.

Now, I wish I could come up with an actual CD for the songs I selected and make it available for you to either purchase or to download.  Unfortunately there’s a little thing called copyright that prevents me from doing that.  I can’t even post links to the songs for you to purchase from them.  That is how dictatorial the music industry is with their stuff.

But what I CAN do is give you the playlist of the songs that I selected IF I COULD come up with a soundtrack, as well as come up with the explanation as to why they were chosen.  Then, if you wanted to, you could go to iTunes or some other music service and purchase the songs yourself.  That way the music industry gets their money and Battlerock Comics don’t get threatening letters from overpaid villainous attorneys playing Scrooge. Got it? 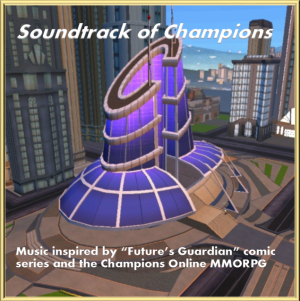 “Caught in the Middle” (Galatea Future’s Theme) by Nemesea – As someone who was trying to balance between being a superhero and her civilian guise as a bestselling writer, the song “Caught in the Middle” was perfect for Galatea Future.  Nemesea was already a favorite group for the female characters, but this particular song seemed to stand out the most for our otherworld heroine.

“Ice Queen” (Elite Ice’s Theme) by Within Temptation – An ethereal tone, especially in the beginning of the song, sets the stage for our ice-based mystic.

“Warrior” (John Battle’s Theme) by Disturbed – Even though John Battle’s comic appearance has so far been brief, this song by Disturbed stood out as the one that describes his youthful attitude and determination.

“My Songs Know What You Did in the Dark” (Major Cross’s Theme) by Fall Out Boy – It would take an attempted coup in City Hall for Xavier Cross to reveal his superpower, but before that, he was someone with a lot of secrets and a lot of information.  What better to have a song that incorporates both these things!

“Fire and Ice” (Keira Fyre’s Theme) by Within Temptation – “Everything you say is lies…”  That line best describes the duplicity of our devious assassin.

“Alive” (Starlett’s Theme) by Krewella – Like many characters I create, Starlett (and, yes, her name spelling is intentional) was based off someone I know, so who better to help pick her song than that person?  Much like her character, she is a freelancing DJ, so she gave me a list of songs to chose from and this was the first one.  Listening to it, I could envision Starlett listening to it as well as she worked in her day job.

“What’s It For” (Candace Sinclair’s Theme) by Emily Curtis – Trying to come up with a song for Candace proved to be a bit difficult.  I wanted something that fit her young and ambitious personality.  Hearing this song (which came from the “Ghost in the Shell: Standalone Complex” soundtrack), it clicked.

“Liar” (Markman Gold’s Theme) by the Rollins Band – This song really encapsulates everything that lies beneath the surface with Markman Gold.  He is a liar.  He sells lies, and he makes money off those lies.

“Dirty Laundry” (Vox Populii’s Theme) by Lisa Marie Presley – Vox lived and died by scandal.  He was an Internet bully who manipulated lives for his own sick satisfaction.  What better way to show this than with a song talking about the need for scandal and depravity?

“You’re a Grand Old Flag – Epic Version” (The Nationalist’s Theme) by Mark Petrie – The Nationalist prides himself as being a patriot, even while he desecrates everything America is supposed to represent.  Listening to this version of the old patriotic classic, you can see the forced patriotism being imposed, and you can almost see him muttering “God Bless America” while he commits acts of terrorism.

“Counting Bodies Like Sheep To The Rhythm of the War Drums” (Psyche’s/Malizia’s Theme) by A Perfect Circle – Psyche and Malizia are two sides of the same coin for the multiple personality created during the “Psilence of Conscience” storyline.  What better way to reflect that insanity than with A Perfect Circle’s song.

“Allein” (Bonus For Champions) by Nemesea – There was a certain direction I wanted to take the “Future’s Guardian” group, and when I heard “Allein” I could see that direction in my mind.  If there would be a group song for what “Project Mycroft” would transition into, this would be it.

Well, that’s it.  That would be a great soundtrack, wouldn’t it?

From all of us here at Battlerock Comics, Happy Holidays!