Can You Hear Me Now?

One of the downsides of dealing with Champions Online – and thus getting material for comics – is the limited amount of props the developers provided for characters.  They do great designs, wonderful and dynamic cityscapes, detailed costume pieces… but they suck in terms of providing props for the characters to use.  You probably saw the dig in “Future’s Guardian” #15 where Starlett asks why John Battle doesn’t have a coffee machine in his loft.  That’s because the designers forgot to come up with one.

One of the key emotes from the old City of Heroes MMO is to be able to read the newspaper.  Cryptic Studios – the same developers behind the City of Heroes – did not add that to Champions until just this past May! (Come on, guys!  You’d think you’d remember that ten years ago!)

Needless to say, if you wanted to call someone in the world of Champions, you better have a headset or an earwig communicator, or have a wristband communication device.

That’s okay if you’re dealing with a superhero or supervillain.  Maybe a soldier or some telepath who can mentally make phone calls.  But for ordinary people?  Or just people with no powers and no tech?  You look really stupid putting your hand up by your temple and pretending you’re talking on the phone. 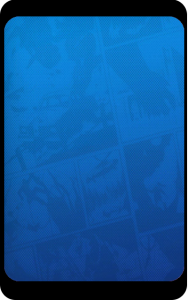 That’s why I’ve gone through the trouble of designing cellphones to be added in the comics.

With all the different cellphones on the market, I decided to come up with a generic smartphone design.  No unique buttons and no brand names.  Nothing that would scream what kind of cellphone it is or whose it is.  With the world of Champions having all sorts of different and unique companies in-game, one could easily imagine either Harmon Industries or some other company deciding to get into the cellphone business and flooding the market with cheaply-made devices.  (Plus, no real-world copyright claims saying I “stole” some company’s “unique design”.)

You can see the first design in “Future’s Guardian” #15 with both John Battle and Mercedes Reale talking on their cellphones.

But in designing the cellphones for in-comic use, I realized that not everyone would want to have the same generic cellphone.  Markman Gold, for instance, would want his own gold-plated cellphone.  And not everyone uses the same wallpaper for their cellphones, right?  Some people may want specific backgrounds for their cellphones.  Maybe pictures of their spouse, or their pet.  Thankfully, once I came up with a template, it’s easy to insert a different image to serve as the wallpaper.

So with the help of some common-use backgrounds, I have come up with a whole array of cellphones.  Some for general use, and some specific phones for certain characters.  You can probably guess which ones are designed for certain people.

Of course, it’s one thing to create the cellphones.  It’s another to add them to the scene.

This is where a graphics program like GIMP comes in.  The process is similar to inserting custom screen images on a TV or monitor screen.  You create a duplicate image, insert the new image – in this case the cellphone – in the middle, and then cut out a “hole” in the top image, and then merge everything into one image.

It takes some work, though.  You have to manipulate the inserted image so that it conforms to the perspective of the background.  It’s easy with a monitor screen.  It’s not so easy when you’re dealing with a cellphone and you have to conform the device around the person’s hand and head, plus where they are positioned.  With this extra work being put in, you can understand why it can take a little longer for new issues to come out.

But the payoff is worth it sometimes.  And hopefully the folks at Cryptic will come up with their own cellphone emotes.  After all, they did finally give us a newspaper to read.

Keep checking here – as well as our Facebook page and Twitter feed – for the latest from the world of Battlerock Comics!